From the outbreak of the First World War both sides were quickly learning the importance of air power. Aircraft mapped enemy trench systems, directed the guns shelling those trenches and worked to ward off opponents’ machine intent on doing the same thing. It wasn’t long until Britain looked to Canada with its vast uninhabited lands and open skies as a place to train the airmen it desperately needed.

The Royal Canadian Legion held its 46th Dominion Convention in St. John’s. N.L., in June. We have a full reports on the business, the resolutions and the election of new senior officers.

It has been 10 years since Canadian Forces were involved in the largest battle since the Korean War. We have a look back by the soldiers who were there.

The sabre-rattling between Russia and the allies in the North Atlantic Treaty Organization has a familiar look. But what is in store if we enter a New Cold War just as the United States goes to the polls?

They were both on the same side during the War of 1812 but the British Major-General Henry Procter was hardly an ally of the native warrior Tecumseh.

Be the first to review “September/October 2016 Issue” 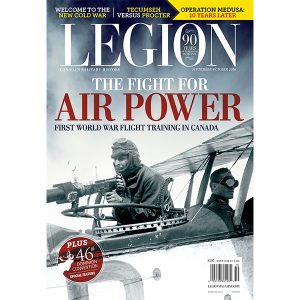