The Curtiss P-40 gained early fame with the American Volunteer Group, better known as The Flying Tigers, fighting the Japanese in China. The plane was flown in multiple theatres during the Second World War and was variously known as the Warhawk, Tomahawk and, by British Commonwealth air forces, as the Kittyhawk. This aircraft bears the livery of Wing Commander James (Stocky) Edwards, a Canadian ace who flew the Kittyhawk with No. 260 Squadron, RAF, during the North African campaign. Edwards racked up 19 confirmed aerial victories. 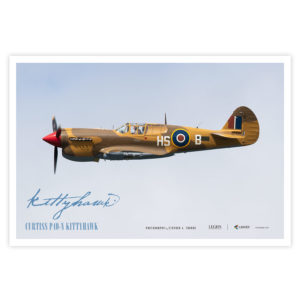