The Spitfire Mk. IX is considered by many to be the best of the 24 versions of the iconic fighter produced between 1938 and 1948. The Spitfire is often described as the most beautiful aircraft ever built. Its signature elliptical wing was designed by Canadian aerodynamicist Beverley Shenstone, who formulated his ideas while working in German aircraft development during the pre-Nazi era. This aircraft bears D-Day invasion stripes. Poet and Pilot Officer John Gillespie Magee Jr. was an anglo-American serving with No. 412 Squadron, RCAF, when he mailed his sonnet ‘High Flight’ to his parents in September 1941. He was killed in a flying accident three months later. He was 19 years old. 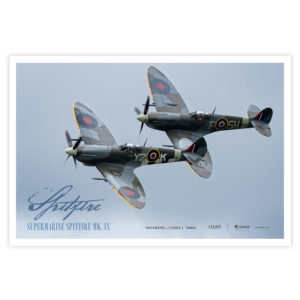