War at Sea Bundle—Buy the bundle and SAVE!

The sea brought explorers, colonizers and navies from Europe to North America—as well as rivalries and wars. Life revolved around the sea and waterways, and naval power ruled. In the world wars, Canada built its own robust navy that could stand its ground with anyone. And today, the Royal Canadian Navy operates around the world. Join naval historian Marc Milner as he retraces Canada’s history—all from a nautical point of view.

Battle of the Atlantic: Canada’s war at sea special edition

Special collector’s edition packed with compelling stories, stunning photos and detailed maps. In September 1939, a U-boat attacked the British passenger ship SS Athenia—the first vessel sunk by Germany in the Second World War—and triggered an all-out sea war. The Royal Canadian Navy played a pivotal role in this critical campaign, which raged on open and treacherous seas from September 1939 to May 1945. “Battle of the Atlantic” takes you back to relive those events.

Battle of the Atlantic: Canada’s war at sea

Be the first to review “War at Sea Bundle—Buy the bundle and SAVE!” 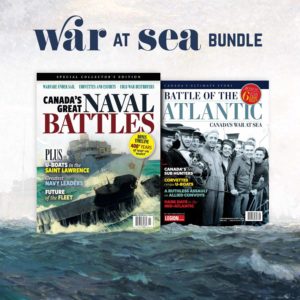