Canadians in the Battle of Britain

July 10, 2020 marks the 80th anniversary of the Battle of Britain, which took place from July to October 1940. The next issue of Canada’s Ultimate Story explores the furious air defence of the British Isles that pitted Spitfires against Messerschmitts, and the role of Canadians who flew and fought. Germany’s air force attacked military and civilian targets from the first day of the war. On July 10, 1940, the Luftwaffe struck hard at Great Britain, attempting to soften the country for a land invasion. The Battle of Britain started with Luftwaffe raids on shipping in the English Channel, then on airfields and radar bases. In early September, the attacks shifted again, to London, Coventry and other major cities. More than 100 Canadians and one Newfoundlander served among the 2,900 pilots of the British air force who repulsed the attacks in dramatic air clashes. Meanwhile, the RAF had begun a strategic bombing campaign against German cities on May 11, 1940. From 1942 on, Allied air attacks became increasingly devastating, as new technology and more and better aircraft became available. Some 1,820 Canadians and 740 Newfoundlanders were assigned to Britain’s Royal Air Force at the outset of the Second World War. On newsstands across Canada Aug. 3, 2020.

Discounts do not apply to this item.

Be the first to review “Canadians in the Battle of Britain” 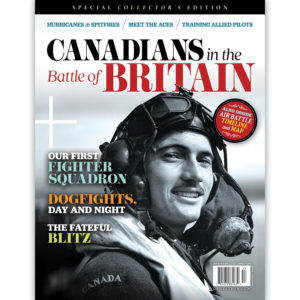 Canadians in the Battle of Britain
$14.95
Menu