The July/August 2021 issue of Legion Magazine is out today! Look for it on newsstands or check your mailbox if you subscribe already.

In 1946, the Canadian prime minister attended a peace conference, visited battlefields and witnessed the Nuremberg trials

In a U-boat rampage off the East Coast in 1918, the schooner Dornfontein was captured and burned

The unveiling of the Canadian National Vimy Memorial in France on July 26, 1936, was witnessed by 3,000 veterans of the battle

Female pilots had broken endurance, altitude and speed records before the war, but their hopes of a wartime flying career were stopped in Canada by a thick glass ceiling

Was the Newfoundland Regiment sacrificed at Beaumont-Hamel? 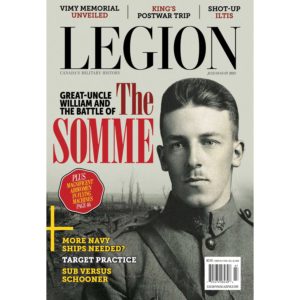