End of the Line
As the Canadian Forces begin a new training mission in the north of Afghanistan, Legion Magazine looks back at the combat mission in Kandahar province—a mission that cost 148 lives, more than 1,800 personnel wounded or injured and carried a price tag of $18 billion. Staff Writer Adam Day provides an illustrated time-line of events, many of which he witnessed first-hand while covering Assignment Afghanistan.

The most bloody fight in the history of war
In the first hour 30,000 soldiers were killed or wounded, and the body count rose by 28,000 more by nightfall.  More than 50 Allied Soldiers were killed or wounded for each metre of the 12-kilometre advance in the first major British offensive of the First World War. John Boileau examines the contributions of Canada and Newfoundland in the bloody Battle of the Somme, which resulted in 1,265,000 dead and wounded on both sides.

We want hogs! We want cheese!
D’Arcy Jenish explores the vital role of Canadian farmers to victory in the Second World War.

Be the first to review “July/August 2011 Issue” 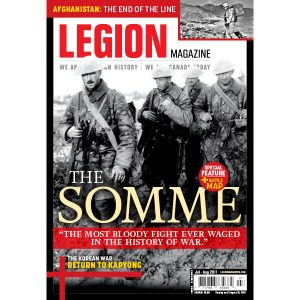