Assault on Hill 70
Four months after Vimy, Canada’s next triumph was equally heroic

My dad, the air force doctor
Physician and flight lieutenant Edward Thorne served with the RCAF from 1941 to 1945, and treated hundreds of grateful flyers

The secret life at Camp X
Life was far from normal for those who worked in the clandestine Camp X, Canada’s school for spies

Face to face
Should Newfoundland have joined Confederation?

Be the first to review “July/August 2017 Issue” 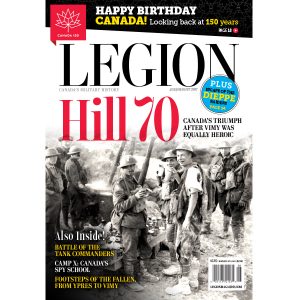