It was the spring of 1944 and the Allies could not wait any longer. It was time to roll the dice in the greatest military operation in history. The Allies—British, American, Canadian—would land on five beaches on France’s Normandy coast in the early hours of June 6—D-Day. Read about Canada’s role in the spearhead force to liberate Europe.

1945: Canada and the end of the Second World War

The year 1945 started with a bang—a massive German bomber attack on Allied airfields. But it was a short-lived offensive. The Allies soon pushed back and were poised to enter Germany. Canadian troops led the advance across Belgium and into the Netherlands where, as liberators, they were greeted by thousands of grateful Dutch citizens. In the east, the Soviet Red Army was tightening its stranglehold on Berlin. The endgame was at hand.

Canada and the Second World War: The Battles

Canada and the Second World War: The Battles 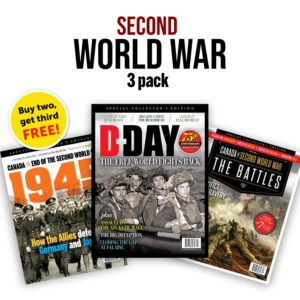