The September/October 2019 issue of Legion Magazine is now available!

THE SINKING OF SS ATHENIA
After Britain declared war, Germany’s first target was a passenger ship bound for Canada

A PROPER APPRECIATION
The promise that led to the Pension Act

EYE ON DEFENCE
Bringing the navy up to date

FACE TO FACE
Should Canada have gone to war in September 1939?

CANADA AND THE NEW COLD WAR
America and us

O CANADA
A day off

Be the first to review “September/October 2019 issue” 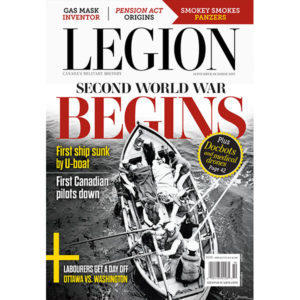