THE DRAGON HUNTERS: The People In Canada’s Military Who Prepare For The Unexpected
The Canadian Joint Incident Response Unit is a rarely heard from component of the Canadian Special Operations Forces Command. Staff Writer Adam Day looks at the secretive unit trained as Canada’s last line of defence against attack by chemical, biological, radiological or nuclear weapons.

POSTERS OF HISTORY: A Focus On Youth
As students return to school, Legion Magazine looks at educating today’s youth on remembrance of Canada’s sacrifices in wartime. We look at the literary and poster contests run by The Royal Canadian Legion attracting as many as 100,000 students a year. As well we examine history in the classroom and taking students to the battlefields of Europe and other places where Canadians have served.

IN MEMORY OF BUFFALO 461
Dedicated enthusiasts at the Canadian Warplane Heritage Museum in Mount Hope, Ont., lovingly restore an aircraft with the marking of Buffalo 461, the ill-fated CC-115 aircraft that was shot down en route Damascus, Syria, killing nine Canadian peacekeepers. It was the largest loss of life in a single action in Canada’s peacekeeping history.

Be the first to review “September/October 2009 Issue” 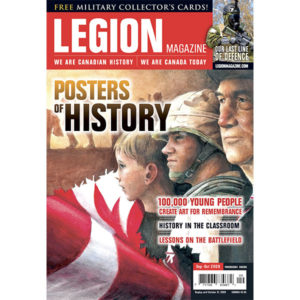