SERVICE ON THE SEA
It’s been a milestone year for Canada’s navy. Coast to coast to coast events celebrated the navy’s 100th anniversary. We finish off the year with a colourful pictorial salute representing a cross section of ships that have served Canada so well.

SHIPWRECK IN MERCY BAY
A ship that sank more than 150 years ago in the desolate, ice-choked waters of the Canadian Arctic became the centre of attention earlier this year when her wreckage was discovered by Parks Canada underwater archeologists. Contributor D’Arcy Jenish provides a retrospective on His Majesty’s Ship Investigator, which met her end while searching for the lost Franklin Expedition.

VANISHING VETERANS
Now in his late 60s, former warrant officer Luke Carmichael has been homeless for most of the last decade. Much of that time was spent living in a tent in the bush near Jordan River, Vancouver Island. Today, he is no longer living in a tent or on the streets, thanks to a unique program at Cockrell House in Victoria, a shelter for homeless veterans.  Carmichael is one of several homeless veterans featured by staff writer Sharon Adams who examines the growing problem of homelessness among those who have served their country.

MURDER IN NORMANDY
Well-known Canadian military historian Terry Copp examines how Canadian soldiers were murdered in cold blood while they were fighting to liberate Normandy, France, in June 1944.

Be the first to review “November/December 2010 Issue” 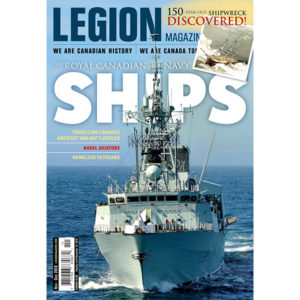